Anybody ever use this Gflex epoxy for west systems. Any feedback ?

You Bet I''v used it on several hulls and love it, this 1/10th U-100 Coors Light was built using G-flex and a small amount of Super glue for tacking some parts. 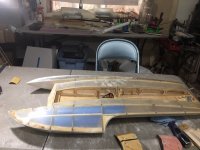 Its not overly flexible is just far less brittle as the other West systems 105 and other epoxy's. When I was stress testing it actually had a great breaking strength the standard epoxy's.

Mix up some equal amounts of both types in the small plastic mixing cup's and let it cure for 24 hrs. The standard West Systems 105 will just about fall out of the mixing cup. But not the G Flex you'll have to destroy the mixing Cup to get to break the bond.
You must log in or register to reply here.
Share:
Facebook Twitter Reddit Pinterest Tumblr WhatsApp Email Link