I was 10 or 11 yrs old here. My father bought a 40 claim jumper. We tried every style of shaft in it, flex, universal joint, that sucker never planed.

Don't know how the NAMBA guys made it work? By todays standards (rules) would this be a legal hull today? 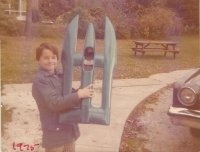 In Namba it would run in the hydro class. We had a few of those out here in the day, ran K&B 6.5's in them. Yep, were very finicky and required a good hard launch.

I had one of those hull in the 80's. Mine was the next version with the traditional center section not the out rigger style but the bottom had the impression of the out riggers.

Today I believe it could only race in open 40 hyro. Vented or two wing hull are not allowed in Sport classes under IMPBA rules. I don't know about NAMBA.

That's what I thought Bert. Didn't think any ventiing openings are allowed . Crazy hull though. Prob. good for D hydro or Open like you said.

funny, I owned a JVS Claim Jumper back in the day too (1974 or 1975, I was like 15 or 16 years old). They were pretty cool looking back then. I used an HP 40 (with Octura Kool Klamp). Wish I had pictures. For what they were, those unique hydro's ran very well once set-up correctly. Although I could never seem to get consistent results. The hydro classes were quite mixed backed then (Wing Dings, Cobra's, Drag N' Fly's, etc.,...).

And, yes, they were a little awkward getting to run properly. I think part of the problem, back then, was that most hobby shops did'nt have extensive experience with rc boat set-up & configuration (mostly airplane guys then). The instructions in those fiberglass kits recommended using fixed, (hull-surface) mounted, aluminum "parallel" strut's of specific depths (.875in, 1.00in, .625in, .500in, .,... etc). When they should have used an adjustable out-drive (transom-mounted) strut configuration which would allow one to find that optimum drive depth/angle.

I can remember seeing Jern & Vern Schmidth ("JVS") testing their new hulls back in the day at Legg Lake, also racing in NAMBA Nat's at San Diego Model Yacht Pond. They sold their boats exclusively through Hobby Shack (and direct I believe) at the time. Would also see Hobby Shack President, Paul Bender, running a few JVS boats at Legg Lake.

My first [serious] rc boat was a JVS mono, with Veco .19 with Octura Kool Klamp. They did beautiful fibreglass hull and gel-coat fabrication. If I'm correct, I believe Jern & Vern were involved ion full-size race boats before they ventured into rc model boats.
Last edited by a moderator: Jan 15, 2016

The guys from Montreal came for a fun run in Ottawa with those, mid 70's.

Buggers got me hooked!

Are any JVS hulls or molds around anywhere, I had a JVS Sport 40, waaaaay back, nice hull .

Looking back David, knowing what we know know, had my father mounted a strut behind the boat (on the transom) with a flex shaft it may have worked better. They were sexy boats for sure. Blue speckled fibreglass.

Jim Recker Jr. said:
Looking back David, knowing what we know know, had my father mounted a strut behind the boat (on the transom) with a flex shaft it may have worked better. They were sexy boats for sure. Blue speckled fibreglass.
Click to expand...

It would be Cool to have one now? One sitting under you bench?

Oh heck no, my father was so frustrated by that boat he gave it to a stranger .

I wish I had it today knowing what we do 30 years later.
E

I own several of the "Claim Jumper" hulls along with many other of the JVS models. I'm always looking for more so if anyone comes across anything JVS I don't care what it is I'm an interested buyer. You can always tell the JVS stuff as Vern/Jeff always used their signature hardwood motor mount rails and center-piece inlayed into the floor. The other thing all the hulls I have of theirs are finished in metal-flake gel-coat with a stripe that runs the length of the deck on each side which is usually how their "standard" color scheme was constructed. There were several variations to the JVS lineup ranging from metal-flake to alpha-jewel variations and of course the base white gel-coat. Pretty much all the JVS hulls that I own are white bottom/metal-flake top with a contrasting color striping in addition. If anyone out there knows of any of these feel free to contact me. I'll pay top dollar for good examples of these hulls. Thanks, Tom

There were a couple versions of the Claim Jumper one that had the cut-outs (as shown in the picture at the top of this thread) and another version where the deck was solid, I've got several of both styles. I'll try to post some images when I get a chance. Seems like yesterday I was about 11 years old and thought the JVS stuff was just the coolest thing ever. I always thought it'd be cool to create a "nostalgia" class in RC boating and resurrect these old JVS, Wardcraft, Hughey, Sightler, 3D, Octura and so on type hulls. Just an idea.

Are either Jeff or Vern still around doing any boating?

And another being worked on