I have been working on this rigger hull, for quite some time now, along with my whiplash, and starting on a miss vegas 6s conversion, some chopping, glassing etc.

This hull is nearly complete, just need about 2 coats of clear on the sponsons then it is ready to hit the water.

Hull design is from Niklas Edlund (Niklas is here on the forum) and his keps .21 I changed a few things and enlarged the plans slightly to make it hold my lipos etc, and arrived at this hull. I had to make it little bit taller than the original plans in order to fit lipos, esc and motor and be able to make it water tight. It is 17.5" wide, and 34" long sponson tip to drive dog. Tub is about 32". I have not weighed it yet, but it is very light, Until I put in those giant 5000mah, lipos. Even with these very heavy lipos, the center of gravity based on my motor placement is right at the turn fin.

This should easily be a 60mph rigger on 6s...probably faster. strut will start at 1" and we will go from there, turning an x640 octura. I have used this same setup in a shovelnose and another rigger around 29" and it got up and moved. Temps were barely luke warm to touch, and amps, guessing below 70.

Let me know what you think, as my only concern now, is the gap between coupler, and stuffing tube. I posted this earlier on a seperate thread. I would like it to be a larger gap , say at least 1" as its easier to remove the coupler if I was to cut the stuffing tube back, but not sure if I will tie up a .187 flex, on 6s at that distance. I have never had one tie up, but have seen it. Mainly in .150 flex though on high power.

I wanted to show you all one of my nearly complete projects that I've been working on this winter. I am very pleased with the result...and couldn't wait to share it, even before I put the 2 coats of clear on. I will take pics, and hopefully video once I get the sponsons clear coated. 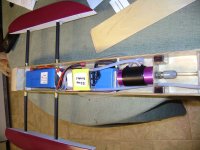 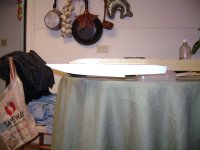 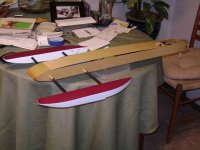 In general you need to align the flex with the stuffing tube the best way you can, if any rubbing or miss alignment it could be problems. A 1 inch gap would be the max I would set it at if it was a nitro rigger, any more and it could start "wobbling". And that would end in disaster for shure.

The original forum thread about the Freebie (if some of you have missed it):

have you had your rigger in the water yet ???

would love to hear how it went,(hoping to build something similar soon)

also where did your C of G end up.