dr gary turner said:
I like the 91 M1 motor
I ran a pair in a twin at Brandon this year
Out of the box the performance was quite good.

David Bryant said:
I don't like it. But using a square drive remedies the situation (by allowing the flex shaft to "float" within the coupler, and not push up against the crankshaft, transferring the torque to the rear rotor assy)
Click to expand...

I think when you use a cone on a flywheel and tight it with any regular nut(square ore coupler) it stops what move...

AgafonovRoman said:
I think when you use a cone on a flywheel and tight it with any regular nut(square ore coupler) it stops what move...

you mean the flywheel collet itself?

David Bryant said:
you mean the flywheel collet itself?
Click to expand...

oh yeah I did not know the right word for it. I call it cone. 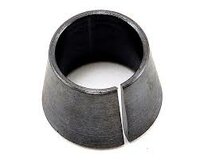 My M1 21 the difference is a dish piston and turbo head button
It actually came with 2 HB , one for low nitro and one for high nitro

AgafonovRoman said:
oh yeah I did not know the right word for it. I call it cone.
View attachment 284634
Click to expand...

I see, thanks
R

ALLAN YUEN said:
I talked Tony Australia about 91 m-line it can use both collet and square. Not arrive new CMB45 M-line yet because factory workers delay from Covid-19
Click to expand...

You cannot use rund flex on M-line engines, they are not designed for it only square drive

Rudi, a friend uses round drive on an M line 45 and 91 with no issues. Can you explain what will go wrong with the engines using round drive?
R

If you dismantle the engine you will see why. All the energy will be on the front end bearing and to the front part of the crank

Rudi, by front, do you mean the disc end? I have seen my friends engines dismantled.

After disassembling and inspecting my .91 M-Line I saw no need to use a square drive only. I’m running it with a round collet and have had no issues.

on engines which do not have a front bearing retaining circlip and if the drive dog play is too important, it is the bearing which takes the thrust of the propeller and this forces on the crankshaft, with a square drive with ferule the pushed is done on the strut

Gilbert;
1. No, from my experience about the same.
2. Not dissimilar, but how is that relevant anyway? If the Zenoah had excessive axial play then potentially the crank could run on the side of the conrod and I’ve never seen that issue.
3. You mean axially? Zenoah rods are tighter at the piston end of the conrod compared to CMB nitro engines.
What damage or harm do you expect to an M line engine and what would cause it?

it is possible that the thrust on the crankshaft with a faster engine speed causes clamping or breakage,
it should be remembered that the imbra races last longer in the fsro or fsrv category
Last edited: Feb 18, 2021

Gilbert, so are you saying the crank shaft web may slip on the crank pin trapping the conrod between the two crank webs? Have you seen this with the M Line engines? How is this RPM related? We will watch out for this issue! What I can say is that I have has several RS101 crank pins break from high RPM use while only supported by two bearings and using square drive. I made my own 2 bearing housing for my RS101 Evo before CMB released the DFB and M line engines to stop the pin breakage.

the M91 Piston is a mild mod on front of liner to improve fuel flow. something most were doing 10 years ago.

I have no experience with the nitro CMBs, but Mike Bontoft built a new front end that added another bearing to the front of the CMB 35. This reduced crankshaft flexing that caused flywheel strikes on the magneto. We also replaced the magneto with the Quickdraw solid state ignition.